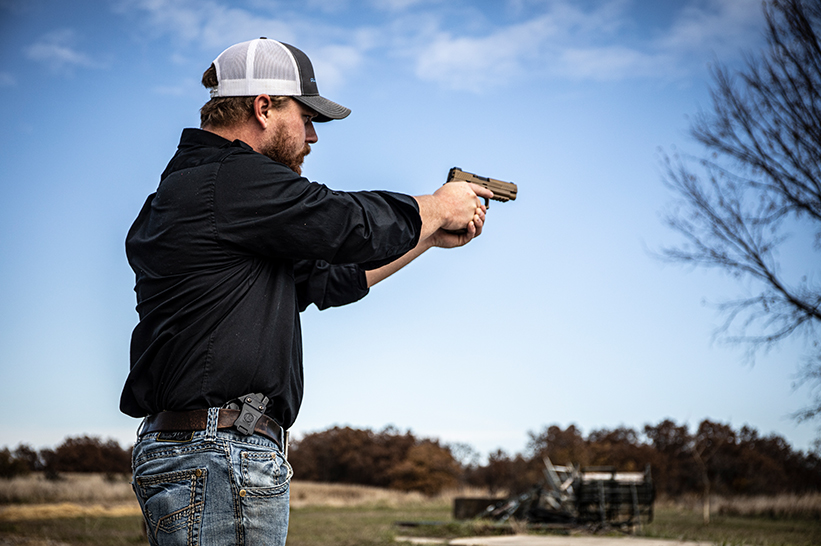 There and gone like a good muzzle-break. It was loud and people definitely took notice. It changed the direction of things, at least for a while. And then, it just kind of fizzled out.

I’m talking about the short-lived life of the .40 S&W. Here and gone in the blink of an eye. What, you didn’t notice? That’s not terribly surprising. Many didn’t.

He came out with a fury, thanks to our good friends over at Smith & Wesson. With a little help and encouragement from the FBI, the .40 S&W showed up on the scene in 1990. And here we are, a measly 30 years later, announcing his death.

A standard-issue defense caliber for a number of those years, the .40 S&W made a valiant effort throughout the last three decades. It’s bizarre, when you think about it, that a round can live a life as long as the .40 has with such little fanfare surrounding it. Ask gun owners who’ve shot the .40 and you get a lackluster response from many. There is an occasional super fan, but most would offer a lukewarm verdict.

Much of the issue comes down to the .40 dealing with middle child syndrome. Smaller than it’s big brother, the .45 ACP, it’s far from the biggest or strongest sidearm round available. And it’s not the fastest or most conditioned like it’s popular athlete little brothers, the 9 mm and .357 Sig.

A slew of suspects is being considered for contributing to the demise of the old .40 Cal. High on this list is the improvement of projectiles, like Hornady’s Critical Duty or Winchester’s PDX1. The lineup of usual suspects also includes additional magazine capacities of smaller rounds and improved time on target.

It’s a tale as old as firearms themselves. A new round or technology shows up on the scene. It steals our attention for a period and gets loads of allure and excitement. But after a while, like most things, we get bored with it. And as we sit around clinging to outdated technology, something shiny and more exciting works its way onto the scene. In this case, work their way back onto the scene, as many agencies are switching again to smaller caliber munitions.

Is the final nail in the coffin? If not yet, it’s likely not far off. And we have a few ideas of who might be issuing the salute.

Hmmm, maybe this FUD is a way for 1791 Leather to back out of supporting the firearms in the .40 caliber category? Just spitballing here but I do know when you have the non-shooting leadership in any level of government level making decisions about something they don’t know or care about you’re bound to end up with the kind of results that we see from the ATF making legislative policies and decisions about what a firearm is and what constitutes an NFA item. It follows that we’ll continue to vacillate between calibers and firearms until “real-world” data and the experiences are blended without bias. Kinda like wishing for the return of unicorns, they’re real . . . right?

Like many things in life, the .40 seemed like a good idea, design, and creation at the time. However, people’s increasing use of a product creates more knowledge about it, and ultimately determines its life span. More and more shooters described the .40 as “snappy”, hard to shoot accurately (though it depends on the shooter), and after a few mags, not much fun to shoot. Also, the .32, .38, and .357 (another “snappy” round) lost sales. The old warhorse .45 continued to be popular, and the 9mm and 10mm grew in technology, quality, and popularity.

This site uses Akismet to reduce spam. Learn how your comment data is processed.

Leather Holster Guide For Your Glock 45

Best Holsters For your Glock 45

How To Choose The Perfect OWB Holster For Your Glock 45