PROS AND CONS: SEMI-AUTOMATIC VS. REVOLVER

One big question for those looking to purchase their first handgun is whether or not to purchase a revolver or a semi-automatic autoloading pistol. Neither of them are objectively better than the other, but an understanding of what each has going for it will help you make a proper decision.

For those of you who are totally new to handguns, you should understand the basic differences between them.

Semi-automatic pistols eschew the cylinder for a magazine. The magazine is loaded, and then inserted into the firearm. The slide is “racked” which loads a round in the chamber. From here, there is no fiddling with hammers. You can simply fire until the magazine is empty. Every time the pistol fires, the next round is automatically loaded into the chamber. As with revolvers, you can buy single and double action semi-automatic pistols. One difference is that with single action handguns, the hammer isn’t manually cocked before every shot. The movement of the slide cocks the hammer. With double action, pulling the trigger both cocks the hammer and fires the pistol. The difference between them is that single action handguns have a shorter trigger pull which make them easier to shoot for some, but it can make accidental discharges more likely. Some are a hybrid called double action/single action. With these, the firearm rests with the hammer uncocked. This means that while holstered, you get the safety benefits of a longer trigger pull. After the first shot, it fires like a single action. The last main type is striker fired handguns. These use a striker, like a pin, and do not have a hammer at all. When it comes to choosing a pistol, there isn’t a consensus best action. They all have their own pros and cons. 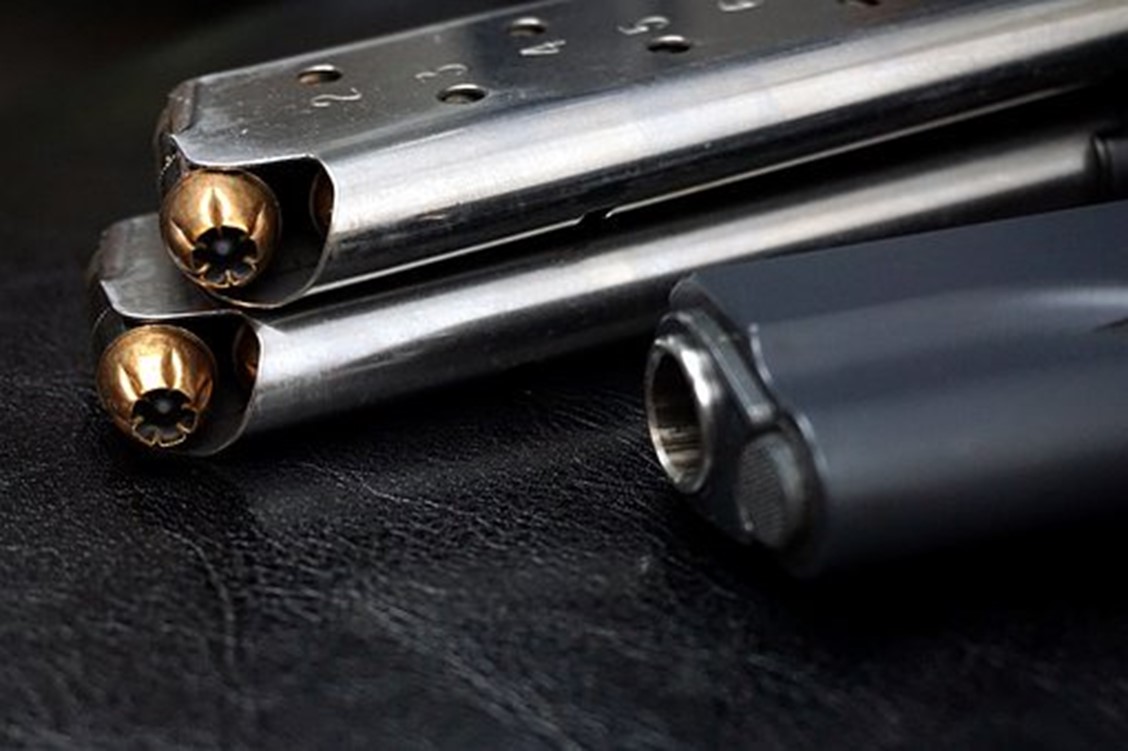 One huge advantage of semi-automatic pistols over revolvers is the magazine capacity. A typical revolver will hold 6 rounds in its cylinder. This can vary slightly, but most cylinders hold 6. The magazine of a semi-automatic pistol will typically hold somewhere between 7 and 15 rounds. This of course depends on the firearm as well. Smaller pistols that are made to be as concealable as possible will have a smaller magazine size simply due to the smaller size of the firearm. The round that the pistol fires will also matter. You can fit more 9mm rounds in a magazine than .45 ACP rounds, more .380 ACP rounds than .40 S&W, and so on.

Revolvers are simpler mechanically than semi-automatic handguns. With fewer moving parts comes a lowered risk of the firearm having issues like malfunctioning.

Revolvers are also easier to maintain, once again, due to their simplicity. Most of the time, cleaning a revolver only means opening or removing the cylinder and using bore brushes to clean the barrel and cylinders. A little wipe down of the rest and it’s good to go. Semi-automatic pistols can require a bit more work. The slide must be removed. Parts like the barrel, action and smaller parts have to be removed and cleaned. Every firearm has a different process to field strip. Learning how to disassemble and reassemble semi-automatic handguns is always a learning process when you first acquire the firearm. With all that said, it isn’t terribly hard to do. It just takes a bit more work.

Both types of handgun are a blast to shoot. They both offer slightly different experiences though.

There are some differences in ammunition. You can find revolvers and semi-automatic handguns in a variety of ammunition ranging from small to large. The main benefit of revolvers is on the larger end. In short, the simplicity of revolvers and the robustness of their parts allows them to shoot larger calibers. Revolvers are heavy, and can generally be made to withstand more force. You can find some obscure semi-autos that shoot incredibly large rounds, like the .50 caliber Desert Eagle, but it isn’t generally practical for them. If you want to shoot as large a round as possible, most of the time you’ll want something like a .44 or a .357 magnum revolver. Beyond that, you’ll find medium and small caliber handguns on both sides of the isle. The exact caliber for you will largely come down to personal preference. It will essentially be a balance between the kind of firepower you want and the amount of recoil you want to deal with.

Reloading is generally easier with semi-automatic handguns for the simple fact that you can release the empty magazine and pop in a loaded one. A revolver’s cylinder has to have each chamber loaded one by one. You can find speed loaders which speed up the loading time though. Of course, the magazines of semi-auto pistols have to be loaded by hand, so at some point loading a semi-auto handgun will be tedious as well. Where the benefits of semi-auto handguns really come into play is in self-defense situations. The ability to quickly load a new magazine is a significant advantage of semiautomatic pistols over revolvers.

When it comes to actually firing them, there is really no way to pick one as better. Some find revolvers easier to handle with their slightly higher weight. The grips vary between them. Specific firearms will shoot in their own ways. The best advice is to consider the features of each, get your hands on some, and pick the one that suits you best.